Prominent International Galleries to Exhibit In
Second Edition Slated for July 25 through 29, 2013

Warhol Exhibition by Gallery Valentine and Warhol Friends in Discussion 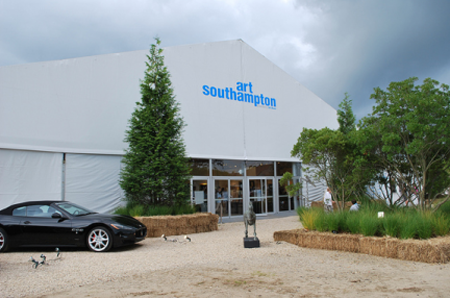 Following the extraordinary success of its inaugural edition last summer, Art Southampton (presented by Art Miami), the premiere international contemporary and modern art fair and marketplace for acquiring the finest works of art available in the Hamptons, will return at the height of the social and cultural season this summer July 25 through 29, 2013.

The first Art Southampton was a transformative event on the Hamptons’ cultural landscape and will once again engage the community both socially and culturally and offer a discerning group of collectors the opportunity to acquire and enjoy the highest level of art in the Hamptons, this year with an outstanding roster of the world’s most respected galleries and two special exhibitions: Warhol by Gallery Valentine and the New York Academy of Art Exhibition of famed alumni curated by internationally acclaimed artist Eric Fischl.

The season’s most acclaimed art fair will take place in a spectacular 100,000-square-foot pavilion on the grounds of the sprawling 18-acre Southampton Elks Lodge adjacent to the Southampton Golf Club located directly off Route 27 A. The fair will commence on Thursday evening, July 25, 2013, with a highly anticipated exclusive opening-night VIP private preview for top international collectors, prominent Hampton figures in business, fashion, arts and media benefiting Southampton Hospital. There will also be an astonishing display and informal modeling of the most fabulous jewels in the world from GRAFF Diamonds. Perrier-Jouët is the exclusive Champagne of the fair and will maintain an exclusive dedicated Perrier-Jouët bar for the duration of the weekend.

Highlights of this year’s Art Southampton

Art Southampton will host an exhibition of Andy Warhol’s work at the fair. To accompany the exhibition, which will be organized by Gallery Valentine, there will be a VIP cocktail party and a discussion with several Andy Warhol experts, including Bob Colacello, former Interview editor and author of “Holy Terror: Andy Warhol Close Up;” Lana Jokel, renowned filmmaker and director of Andy Warhol; Ultra Violet, Factory superstar and Christina Strassfield, chief curator at Guild Hall.

The New York Academy of Art will be partnering exclusively with Art Southampton. America’s foremost narrative painter and Academy senior critic, Eric Fischl, will curate a special exhibition of works by famed, renowned Academy artists.The Academy will additionally host a VIP event at the Fair supported by a complimentary chartered bus out of New York City. Also on exhibition during Art Southampton will be the artwork of ROSS School students and summer students in a curated exhibition.

Award winning LaGuardia Design will design the Art Southampton Sculpture Garden and main entrance of the pavilion. LaGuardia Design actively pursues an interest in how elements of the native landscape, existing topography and neighboring influences help define the character of each site and look to unify the landscape into a cohesive link firmly connecting architecture and site.